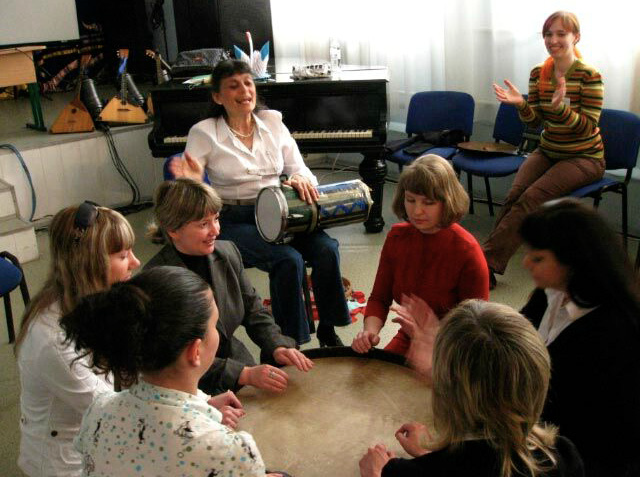 Before I begin, I must confess: I discovered Dr. Dorita S. Berger’s work by accident — but a great accident nonetheless.

While working towards my Dalcroze Certificate, I had the good luck to also be working with a group of occupational, physical, and speech therapists. We were collectively running two summer camps. The first was for children with cerebral palsy and ran for four weeks. After a week in between we ran a second for autistic children.

While trying to come up with more methods and exercises to assist with the children, I Googled “music and physiology” and the rest is history.

Dr. Dorita S. Berger (Dr. Dori) is a music therapist that approaches her work with a heavy nod to eurhythmics. Her work with—and subsequent writing on—autistic children is not only extensive, but also insightful. Her methods and treatments were not developed just from the perspective of a clinician, but also of a Dalcroze teacher, and the two make for a wonderful approach.

The first book I read (and continue to read) that Dr. Berger contributed to is The Music Effect: Music Physiology and Clinical Applications (2016), which she co-authored with Daniel J. Schneck. I was drawn to this book initially by the title. (Music Physiology! How cool is that?!) What I discovered were the commonalties between myself (a Dalcroze teacher in-training) and the therapists I was working with. I was surprised at the common language eurhythmics teachers and therapists had in common.

This became clearer while reading Emile Jaques-Dalcroze’s Rhythm, Music and Education (1921). I began to notice how specific parts of our physiology like the nervous and vestibular systems, along with things like balance, coordination, and temperament were discussed in both books. I was also taken with how The Music Effect, while being a clinical work, did not go over my head.

By the time I completed my Dalcroze Certificate, I’d read all of Dr. Berger’s books and they continue to be valued reference points in my teaching.

In 2015 she published Eurhythmics for Autism and Other Neurophysiological Diagnoses, and this text seemed to tie all of the others together. All of Dr. Berger’s books go to great lengths to explain our physiological structure and how it relates to the structure of music. In chapter 4, she defines music as being “a synthesis of multifarious elements, the acoustic energies of which serve to communicate the fundamental nature of its creator—the composer—and the physical, emotional, and mental energies of the performer” (Berger, 2015, p.97).

It is these dynamic attributes that allow us to process music in various ways. For Berger, it is an art form that caters to the dynamic qualities of our individual character: “…each physiological system and brain processes music differently, according to whether the listener’s body rhythms and energies resonate with the incoming intricacies of this aesthetic form of expression” (Berger, 2015, p.97-98).

Anyone who has ever worked with children or adults who have an autistic spectrum diagnosis (ASD) knows the varied attributes that come with it. At its core, ASD is a neurological based disorder, but many autistic children also demonstrate speech delays, low muscle tone, emotional outbursts, lack of body awareness as well as other sensory based delays. Many of these disorders are unfamiliar to people who do not work with these populations of children and adults. However, anyone who has ever taught a eurhythmics class to a roomful of children with ASD knows and understands the immediate effects it has. I believe this is because eurhythmics allows the students to express the varying ways their physiology processes music. It also provides the teacher the tools to ebb and flow with the varying needs of the class. In Rhythm, Music and Education Dalcroze (1921) speaks to this: “…music is grounded in human emotion on the one hand, in the aesthetic research after combinations of sound on the other, the study of sound and movement should be collated and harmonized, and no one branch of music should be separable from the others” (p.7).

When I began teaching in a self-contained school for autistic children, I had to learn how things like low muscle tone, lack of body awareness, balance issues, speech delays, sensitivity to loud sounds, and behavioral problems were all a part of ASD. In addition, there were students who had perfect pitch, could memorize whole sections of sonatas or pop songs, and even one student who could recite the entire lineups for the Chicago Cubs, St. Louis Cardinals, and Pittsburgh Pirates from memory (including jersey numbers and positions). Mind you, I also had students who displayed none of these attributes. The ability of eurhythmics to simultaneously address the needs of all these varied learners simultaneously is something that continues to surprise me.

What has also surprised me over the years is the amount of shared vocabulary amongst Dalcroze teachers, occupational therapists (OT’s) and physical therapists (PT’s). When I began working with an OT it didn’t take long for us to understand each other. Terms such as proprioception, body awareness and socialization were terms we had in common. During my Certificate studies, I was not surprised to discover that eurhythmics classes were given to children with special needs in Switzerland as early as 1917. It makes perfect sense!

In her latest book, Kids, Music ’n’ Autism, Bringing Out the Music in Your Child , Dr. Berger espouses further on the dynamic effects music has on all of us. This slender volume provides excellent explanations of physiological functions like the vestibular system without going over the reader’s head. Dr. Berger continues to use an approachable style of writing.

As more and more research emerges regarding the effects music has on our brains, the words of Dr. Berger continue to make more and more sense in the ever-evolving world of music education. In a chapter titled “The Sense-Ability of The Musical Brain” Berger breaks down individual components of our physical systems further showing the reach of musical power.

The first time I’d ever heard music described as having a tactile quality was in my eurhythmics studies with the late Robert Abramson. Dr. Berger does so again in this book:

We feel/hear/see how we and others make music, we see/touch (and taste, if wind instrument) the instruments or mallets, we see/touch/smell the resin on the bow, our senses interacting instinctively and simultaneously. In addition there are inner brain rhythms to sensory system processing of information, all happening collaboratively. If there is something amiss in the sensory processing, then the more that music activity is presented, the more such collaborations can be better organized to become adaptive, automatically! There can never be too much interaction between a child of any age and function and music!

I love this passage because I have experienced this first hand. I have seen how a eurhythmics lesson allowed a roomful of autistic students the chance to not only organize themselves, but also wake up emotionally, physically, socially, and kinesthetically.

In Kids, Music ’n’ Autism, Dr. Berger describes many ways for an individual with ASD to have music in their lives, and also provides insight into other classifications associated with ASD such as anxiety and Attention Deficit Hyperactive Disorder (ADHD).

Perhaps the greatest service this book provides are guidelines for parents of autistic children. Dr. Berger not only provides coherent explanations on ASD, but also insightful suggestions for parents. She not only writes about eurhythmics, but also music therapy, and whether or not that is the right approach. This leads to a discussion of instrumental lessons and how to find the right teacher, one who understands what’s involved in working with an autistic person. As someone who has worked up close with autistic children and their families, I know the service this book provides is invaluable.

Dr. Berger could be a catalyst in the next step of music education. This incredible and dynamic art form is capable of reaching us in ways other art forms and subjects do not. According to the Center for Disease Control and Prevention (CDC), the current rate of ASD amongst American children ages 3-17 is 1.1%. What’s more alarming is the CDC has also produced data showing how the depression rate is double that (2.0%), and the anxiety rate is triple (3.0%).

Dr. Berger’s work continues to provide further proof as to why we need to expand the scope and usage of music education. She seems not only to be justifying the work of Dalcroze, but also that of Swiss psychologist and education reformer Edouard Claparede, who believed that the only way education could truly be effective was if those teaching understood the physical functionality of human beings. Dalcroze was, not surprisingly, influenced by his work and I believe they were ahead of their time.
The National Center for Education Statistics reports that 13% of the American Public School population receives special education services, roughly 6.5 million children. Educators cannot go into a classroom now without the knowledge of varying classifications and diagnoses. However, a well-trained music teacher with a eurhythmics background can go into a classroom and be highly effective with all students, providing moments throughout the day for self-realization and understanding.

The expansion of music education in our schools is on the horizon. Dr. Berger continues to provide eloquent words as well as clinical insight to back this assertion up. As Dr. Berger concludes:

Every stimulus changes the brain. And music, one of few activities that is a whole-brain, whole body stimulus, activates multiple areas. Emotions are immediately sensitized. Feelings, aesthetic sensations, are felt throughout one’s body — whether or not the person is aware of this. Vibrations message the body, tonalities soothe, and active playing of an instrument — however minimally — stimulates movement, motor sensations, and an awareness of self.

I can’t wait for her next book!

This article was originally published in the Fall 2017 issue of Dalcroze Connections, Vol. 3 No. 1.

Music is my passion, and I have worked in every facet of the art form. I recorded and toured as a professional musician; I worked at Def Jam Records in marketing and promotions; I created my own music education curriculum, and have been in music education for the past two decades. I have taught a wide-range of students: from typically developing, to children with physical limitations and kids on the Autism spectrum. I have taught in schools that serve inner city students, children with behavioral and emotional issues, and have worked in alternative education with at risk populations. Throughout my experience, I've seen how music can unlock and enhance the talents of any child, and I absolutely love to share that with as many kids as possible. I blog at: https://medium.com/@P_cerria

View all posts by Patrick Cerria →