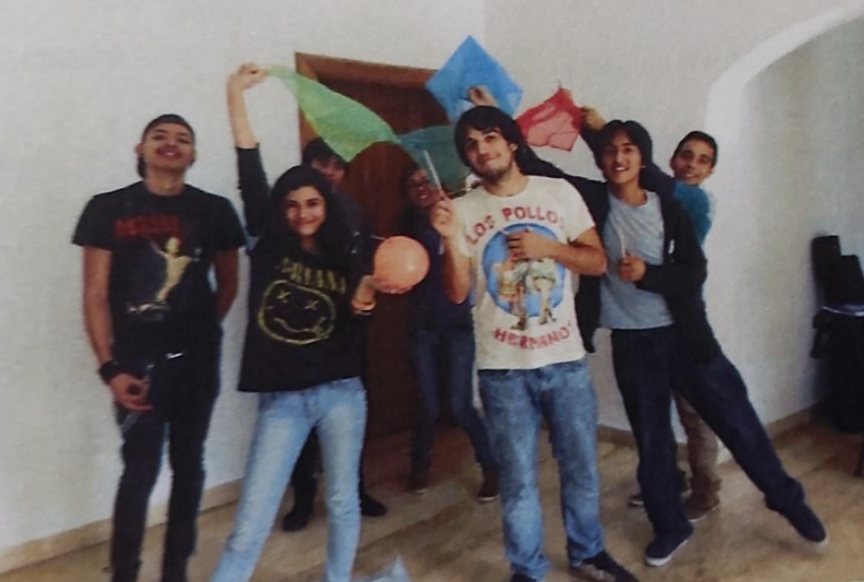 For twenty years I have been teaching the ear training class, also called musical language or solfège, at the Escuela Superior de Música of the Instituto Nacional de Bellas Artes y Literatura in Mexico City. When I first began to teach these classes, I did so in the same traditional way in which I had learned—through lectures on theoretical concepts, learning to read notation using the Pozzoli Method (spoken and sung exercises dating from the nineteenth century used in solfège and music reading coursework), leading dictations, and read-ing rhythms. However, I didn’t know whether my students truly understood everything they were learning in the classes.

I always felt something more was needed, but I didn’t know what it was. Although I tried to explain in detail the concepts of rhythms, scales, intervals, chords and their inversions, and play these on the piano, I realized my students still could not sing without losing the tonic. It was also difficult for them to sight-sing, perform harmonic dictations, and conduct and read rhythms fluently, among other things.

In 2002, I was invited to a conference of music educators held at the Facultad de Música of the Universidad Autónoma de Nuevo León and CONARTE in Monterrey, México. I was struck by the name of the conference: Dalcroze, Orff, and Kòdaly: Similarities and Differences. At the time I had not heard of Dalcroze, so it was of great impact when the teacher, Dr. Herbert Henke, asked us to come on stage to take the class. Then I thought, “For what purpose? Will it be necessary to be here sitting on the floor and not comfortably in our places for this class?” Nevertheless, I stood from my seat and went on stage with a few others to participate in the class. I could not have made a better decision! Finally, I had found what I had longed for: a different way of teaching where students could be themselves, perform, understand, develop, participate, play, have fun, learn, feel, and live the music!

From that moment to the present, I have been interested in learning more about this new way of doing things and began my Dalcroze certification at Carnegie Mellon University in Pittsburgh, Pennsylvania. Years later, I was able to complete the Dalcroze certification in México at the Conservatorio de las Rosas (Morelia, Michoacán).

I wanted to know more about the origins of Dalcroze education and the so-called New School or Active School, which was a movement of pedagogical renewal that emerged at the end of the nineteenth century in opposition to education based on formalism and memorization (De Zubiría Samper, 2014, 98).

It had as precursors Rousseau, Pestalozzi, Froebel, Lussy, and Claparède, among others. The New School postulated that “learning comes from experience and makes the child the main actor in education, the center around which the entire educational process must revolve” (De Zubiría Samper, 2014, 95). It also intended that music education be active-participatory and carried through in an environment of play, joy, and trust; in these conditions, children could flourish creatively. This new vision of education gave much weight to socialization and education through and into life. (ibid., 96)

The birth of eurhythmics at the start of the century coincided with renewal of emphasis on human individuality. In becoming a new area of philosophical interest, about human beings with their real-life problems; inevitably, it became central to the blossoming of education, psychology, and sociology.

Starting from the general principles of the New School, the so-called Active Musical Methods emerged, including Dalcroze education: “ …and it should never be forgotten that rhythm is considered as a mode of education through and into music” (Jaques-Dalcroze, 1926, 66).

The principles of Émile Jaques-Dalcroze’s pedagogy provide a complete musical training system in which the development of an immediate physical response to a stimulus is made automatic. Jaques-Dalcroze described eurhythmics as a necessary experience with music through movement, which develops the sense of “muscular rhythm and … nervous sensitivity” rendering the ear attentive to “all gradations of intensity, duration and time, phrasing and shading…” (Jaques-Dalcroze, 1930, 106)

Monsieur Jaques, as he was called, realized there was no material available to develop auditory skills in the students, so he proposed a new way of achieving this goal, emphasizing the ability to internalize movements, rhythms, melodies, and harmonies. Other important goals included the ability to stop the body in motion and start it again, feeling the pulse internally, moving the body through space, and hearing and feeling with the body and not just the ears, and more besides.

All of these goals are developed through Dalcroze training and it was just what I wanted to do: to help students internalize sounds and be able to hear them in their heads, as well as developing innate body sensitivity by embodying the music they heard. Moreover, I loved the idea of experiencing music and avoiding theoretical concepts only learned intellectually. For many of my students, this seemed impossible to achieve, as they were used to relying on an instrument such as the piano to know how a score sounded; for others, moving was a challenge they were hesitant to face.

Traditional music theory and solfège classes focus on students quickly analyzing and performing rhythm and sight-singing exercises and rarely worry about students using or listening with their bodies. However, through Dalcroze solfège—as Robert Abramson points out—students with hearing issues will finally be able to learn to sing in tune and write dictations and therefore enjoy the process of learning solfège and ear training (Abramson, 1997).

I asked my students what solfège class meant for them. All agreed that it was to learn the notes of a score, sing them correctly out loud, and know the values of the rhythmic figures.

The study of solfège awakens the sense of pitch and tone-relations and the capacity of distinguishing tone-qualities. It teaches the pupil to hear, and to reproduce mentally melodies in all keys and every kind and combination of harmony; to read and improvise vocally; to write down and use the material for constructing music himself (Jaques-Dalcroze, 1921, 65).

Through continuous eurhythmics and solfège practice, stu-dents can begin to feel the differences among the pitches of the scale, the timbres of different instruments, the sensations of changing harmonies, and the sensation of short and long durations. Students also use their voices to improvise small melodies with their classmates, thus sharing their experienc-es. Their way of hearing changes over time, with more and more sensitive listening. As Eva Nivbrant writes: “Hearing and listening are not the same. Hearing refers to the physical ca-pacity for perceiving sound, while listening implies a reaction or an activity of some kind: acting, sensing, experiencing or taking the sounds in” (Nivbrant, 2015, 35).

In my case, this new way of learning and experiencing music was a process that took about a semester to get used to. At first, the students were embarrassed to sing and even walk. Little by little through the exercises, however, they began to participate more actively and freely. They were realizing that it was necessary to move when listening to music; that it is the whole body that listens and not just the ears.

I remember when I first started teaching Dalcrozian solfège classes: I told the students, “We are going to sing the C major scale.” They looked at me strangely and said to each other, “The C major scale? We learned that years ago.” Undeterred, I asked eight people to line up and raise one hand to waist height with palm facing forward. We sang the C major scale ascending and descending, with each sound represented by the palms of the eight students. I then asked for some students to lower their hands while the others kept theirs raised. This time, we sang the scale but only out loud for those people who had their palm raised. If a student had their arm down, this pitch was sang internally (no sound). The students discovered that when they attempted to sing a specific scale degree after a few pitches not being heard out loud, they had lost the notion of tonic and each degree that they were supposed to be singing. They realized that they did not know what the C major scale sounded like. Though they knew the theory and structure, they had not internalized the sounds. While eye-opening, it was also an interesting and fun activity for the students.

We did other exercises, such as stepping whole steps and half steps and singing dichords, trichords, and tetrachords. In this way, the students eventually internalized the scale.

Incorporating improvisation was not an easy task at first. We started by improvising with three fundamental chords in any given key: tonic (I), sub-dominant (IV), and dominant (V). As the students walked around the room, they vocally improvised on the pitches of each chord. When they heard something other than I, IV, or V, they had to freeze silently in place. When they heard the I, IV, and V chords again, they resumed walking and improvising.

Improvising is a fundamental aspect of Dalcroze pedagogy, a natural continuation of solfège and eurhythmic movement. Jaques-Dalcroze placed great emphasis on improvisation as an essential tool for those who were trained masters in this music education approach. He emphasized the need to improvise music that expressed the desired sensation, and he insisted that improvisation should above all be musical.

At the end of the semester, I again asked my students: What is solfège and ear training? The new answers were: a class in which we experience freedom of movement, freedom to sing, and where our body responds to the music we listen to; a fun class in which the ear develops and the body and the mind express themselves openly; a class where we work in a cordial environment and with lively group dynamics so that we help each other and enjoy every activity we do.

The response of my students in that first semester is what motivated me to continue down the path of Dalcroze solfège. I firmly believe that if students embody the music they hear, and if they can concentrate and respond to music in their own way in movement, then students can listen more carefully to rhythm, melody, and harmony, can write what they hear and, in turn, listen to what they write.

Here is a Chinese proverb: “I hear and I forget, I see and I remember, I do and I understand”—at the end of each solfège class, my students began to understand the meaning of this proverb.

Step-by-step, my students have been able to achieve hearing music with their eyes and seeing music with their ears. By practicing rhythmic movement, their learning experiences have been deepened. Through improvisation, my students have become more sensitive about what they hear inside and want to express. In experiencing Dalcroze solfège in general, they are now able to represent music with their bodies before recreating it at their instruments. At the beginning of each course I tell them to remember that through our work we will attain “ears that see, eyes that listen, and a body that moves.”

Margarita Martínez Mejía was born in Mexico City. She studied Piano at the Escuela Superior de Música with the pianist Maria Teresa Rodríguez. She has given recitals in México and won the piano contest Dialogando con los clásicos. She obtained a bachelor in computer science from UNAM. She took classes in pedagogy and music education in Cuba and has a diploma in choral conducting. She attended Carnegie Mellon University to study Dalcroze and holds Dalcroze certification from the Conservatorio de las Rosas in México. Margarita also has a master in art pedagogy. She is the author of two ear training books for teachers and students which include dictations on CDs. She obtained the award "Academic Performance" by Instituto Nacional de Bellas Artes y Literatura (INBAL) in México. Margarita currently works at the Escuela Superior de Música and at the Centro Morelense de las Artes.