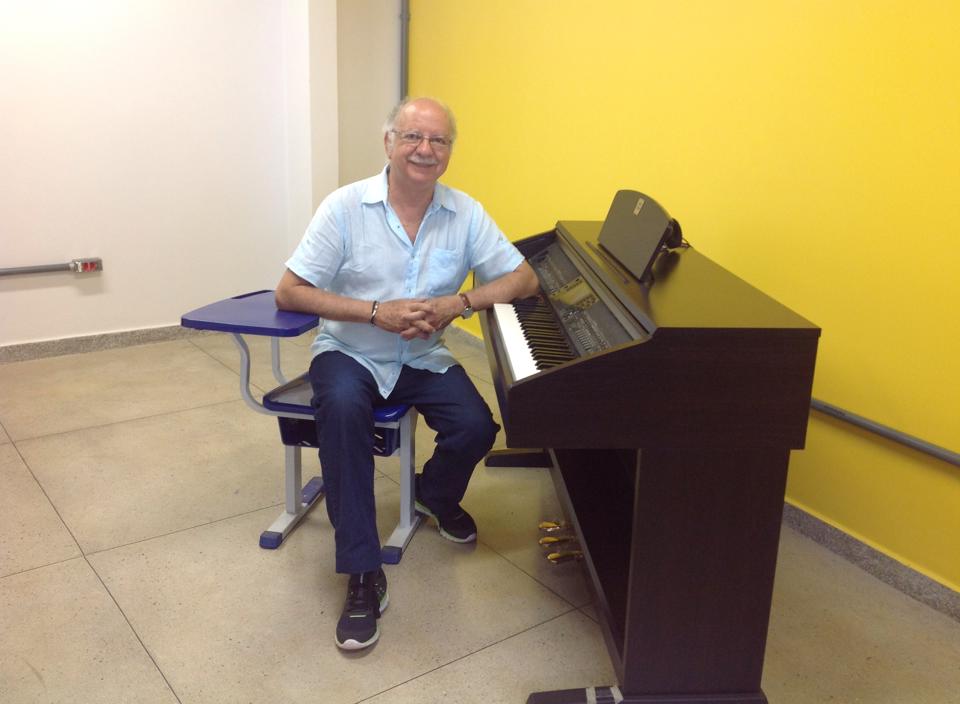 “My Dalcroze eurhythmics teaching experience in my home country, Brazil, and other Latin American countries“
By Elda Nelly Treviño (México)

Iramar Eustachio Rodrigues (1944–), one of the most renowned and loved Latin American specialists in Dalcroze eurhythmics, was born in Brazil, became a nationalized Swiss citizen, and retired from the Institut Jaques-Dalcroze in Geneva after many years of teaching (though he is still active with several groups of seniors). He shares some ideas about his broad teaching experience in Latin America with the community of the Dalcroze Society of America.

Elda Nelly: Hello, Iramar. It is a great pleasure to talk to you about your experiences both as a student in your youth and as a teacher in Latin America. Could you please tell us about how you started your work in Brazil?

Iramar: In 1975, Monsieur Dominique Porte, director of the Institut Jaques-Dalcroze in Geneva, Switzerland, received a request from the Ministry of Education of Rio de Janeiro to introduce Dalcroze pedagogy in music education training courses in several schools. At that time, by an invitation from Monsieur Porte, I had the opportunity to represent the Institut in the first event of its type in Brazil, which lasted ten days.

From that moment and throughout the following nineteen years, I was invited by the Music Conservatory Brooklyn Paulista of São Paulo to work during their winter courses for teachers. Together with Professor Carlos Miró of the Universidad de Concepción in Chile, we shared the same students, myself working in the area of Dalcroze eurhythmics, and he in Kodály methodology. The collaboration was interrupted because of issues related to the COVID-19 pandemic, and we still do not know when it will continue.

Elda Nelly: A matter that piques my attention is to know your opinion about the main characteristics of Dalcroze eurhythmics practice in Brazil. How is it different from that of Perú, México, Chile, and other countries, according to your expertise in the field?

Iramar: The problem is the same in Brazil and other countries, except for Argentina; in Argentina there were professional teachers of Dalcroze eurhythmics many years ago who were directly taught by Emile Jaques-Dalcroze. A “porteña” professional education remained: in Buenos Aires and other provinces, there were people who received education from Mme. Lía Sirouyan (former student of Jaques-Dalcroze), whom I have met frequently, since she visited Geneva on several occasions to teach at the Institute Jaques-Dalcroze.

Elda Nelly: Did you take lessons from Mme. Sirouyan?

Iramar: I taught the same students with her in Argentina. However, the “root” that remains in Argentina was not possible in other countries such as Perú, Chile, and Brazil because there was no solid training provided by a well-trained teacher. I discovered Dalcroze eurhythmics at the Universidad de Chile, where I had a scholarship from the Organization of American States as a Brazilian to study at the Interamerican Institute of Music Education. I studied general music education at the Universidad de Chile for two years and discovered Dalcroze eurhythmics, which I did not know before.

Elda Nelly: Who was your Dalcroze eurhythmics teacher in Chile at that time?

Iramar: Iara Smith, who studied in Geneva. She was a representative of Dalcroze eurhythmics in Chile. Years later, she passed away and everything ended. Recently I have started a collaboration with the Escuela Moderna de Música y Danza in Santiago de Chile, where we had three generations of students; however, the program is closed for now because of the COVID-19 pandemic.

Similarly to México, Brazilian geography is very large and diverse, which makes it difficult to establish a central training center. There are two Geneva-trained Brazilians who could teach in Brazil: one of them, Michelle Mantovani, who teaches children at the IJD, married a Frenchman, and Arthur Simoes, who is Brazilian with Swiss parents, does not live in Brazil.

Before the COVID-19 pandemic, I visited Brazilian universities several times, where I taught Dalcroze eurhythmics courses. Nevertheless, those were not part of a professional training, but rather a part of the general curriculum in music education, which I taught as guest faculty.

Elda Nelly: I understand, then, that there is no permanent training program in Brazil, though. Right now in México, we are trying to restart a Dalcroze eurhythmics certification program at the Universidad Panamericana in Mexico City, after its closure in 2016 at the Conservatorio de las Rosas in Morelia, Michoacán. However, the pandemic has not allowed us yet to do it.

Iramar: In fact, there is no Dalcroze eurhythmics professional training at present in Brazil. I want to mention that in the second generation of the certification program in Chile, we had five Brazilian graduates who returned to Brazil, and each one of them has an independent school. To name a few: Maria Oliveira Henriques from Porto Alegre, Rafael Moreira Manzzi de Souza from Campinas, and Sandra Mora Valenzuela from São Paulo. Moreover, a former student, Camila dos Santos, who holds a bachelor of arts in music and movement from the Haute École de Musique and the Dalcroze Institut in Geneva, is now the eurhythmics teacher at the Liceo Pasteur in São Paulo and works with both children and teenagers.

Elda Nelly: Since you have taught in several Latin American countries, what differences do you find in the groups of students from Brazil, México, Perú, Venezuela, and Chile?

Iramar: It is very clear. In Latin American countries, the Spanish-speaking persons in general are very good human beings, very creative, but with a weak foundation of studies in general, as well as weak basic music knowledge. They have a positive attitude toward learning and good voice qualities, but they lack a foundation of basic knowledge. Among such people, I find there are two categories: a) the curious ones (about 30 percent) who go, search, and find solutions; and the other 70 percent, which I call the “comfortables,” who listen and copy what the teacher does, but do not go beyond that.

Elda Nelly: Yes, they are the “copy-pasters”. However, they cannot improve their teaching, since they do not pursue further training.

Iramar: Exactly. In the Spanish-speaking countries, those who develop well in Dalcroze are the ones who have conservatory, university, or graduate training.

Elda Nelly: Likewise, I think that Dalcroze eurhythmics training cannot substitute for basic general music knowledge competencies and skills; however, there are many persons who mistakenly believe so, and that is the reason why, in many cases, the practice of Dalcroze eurhythmics is misinterpreted.

Elda Nelly: Given the prevalent conditions of Latin American countries at the moment, what could you propose to the young generations of musicians and teachers who want to pursue Dalcroze training?

Iramar: There are two different situations. In Brazil, for example, there are talented people who want to come to Geneva to pursue further training, but they have families, jobs, etc. in Brazil, which make it impossible for them to do that. We are in a critical situation… in the Brazilian case in particular, the solution would be to have a specialist living and working in Brazil permanently. There is a very well-prepared person in Brazil named Clisses Mullati, who studied with Bob Abramson, Lisa Parker, and then at Carnegie Mellon. She has her independent school, however, she does not work at a university which could sponsor a training program.

We are living a crisis now in the world of Dalcroze eurhythmics. All of us who work on behalf of it want Dalcroze to shine and to spread; nevertheless, things are not that easy. Moreover, I had this same conversation you and I are having now with my former teachers in Geneva years ago, who were direct students of Emile Jaques-Dalcroze. Currently, one of his direct students is still with us: Mme. Marie-Louise Hatt-Arnold, who is ninety-six years old. She is a living dictionary. She shares her knowledge with the people who ask her. She formed me as a musician and as a Dalcroze teacher.

Elda Nelly: Reflecting upon what you said in relation to the lack of basic music knowledge in the Latin American population in general, I think that this is precisely the reason why Dalcroze eurhythmics is not so popular in Latin American countries: it may become extremely difficult or even impossible to practice with a high standard because such deficiencies are prevalent, and therefore people get frustrated.

Iramar: Exactly. Furthermore, to teach Dalcroze eurhythmics without mastering it, being conscious about it, knowing its principles, its aims and goals, is impossible even for the greatest composers. Nowadays, we have a dearth of written documentation about Jaques-Dalcroze’s original sessions and how Dalcroze eurhythmics practice was like in its beginning. The direct students of Jaques-Dalcroze did not leave any written testimonies about his teaching practice.

Elda Nelly: That is a critical matter because the original practice remains only in the memory of the persons who lived it, and unfortunately, that has become unavailable for the present and future generations of teachers and scholars.

Iramar: We are now going through a transitional period. We neither know where we are going, nor do we know how we are going to spread the Dalcroze eurhythmics practice. In any case, I think we have to continue our mission without knowing what will happen.

Elda Nelly: Certainly, Iramar, and each one of us shall continue working wherever we are, in the best way we can, and continue to study. I hope we can have you back in-person in México again soon. We Mexicans love you very much.

Iramar: I love Mexicans very much too because regardless of all the financial difficulties, they are people who have “soul and good heart.”

Iramar earned his diplôme supérieur in piano in Brazil in 1964 and a diplôme in music education at the University of Chili in 1969. In 1975 he obtained a master's degree at the Institut Jaques Dalcroze in Geneva, Switzerland, where he was given an award for pedagogy. In 1975 he obtained a diplôme in harpsichord at the Conservatory of Geneva. From 1976 to 1986 he was the vice president of the FIER and collaborated in professional Dalcroze training programs in Chili, Spain, Italy, France, and Switzerland. From 2003 to 2018, he was frequently invited to give master courses throughout Mexico. He is now a professor in the seniors program at the Institut Jaques Dalcroze in Geneva.