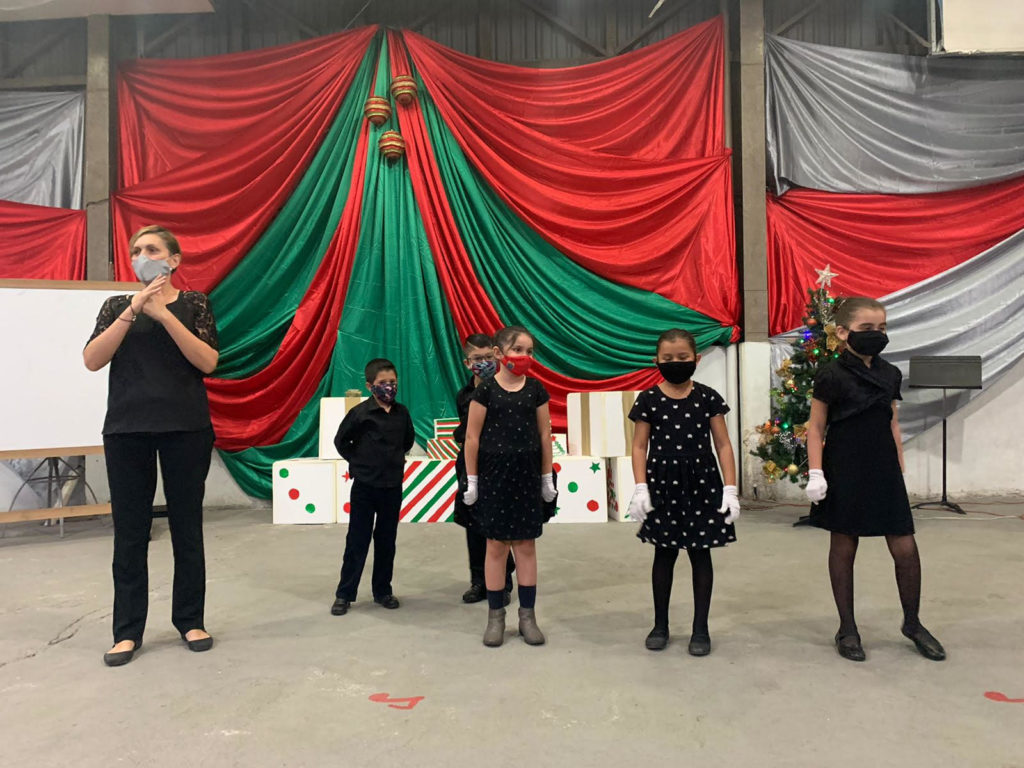 Throughout my musical career, solfège (music reading and theory) has always been rather bittersweet—challenging yet fascinating. As I progressed from beginning solfège in grade school to counterpoint in college, I became frustrated with the fact that these classes were abstract, repetitive, and, ironically, not very musical. This propelled me to search for a more kinesthetic, creative, holistic, and musical way of learning solfège, which I found with Jaques-Dalcroze eurhythmics.

Since the beginning of 2021, I have been teaching solfège to students ranging from 7–20 years of age at SINEM Grecia in Costa Rica with the underlying goal of ensuring that my lessons were characterized by sensitivity and musicality. This has not been easy. The COVID-19 pandemic changed our lives forever as music teachers. It has compelled us to embrace virtual lessons as the norm to stay safe instead of face-to-face lessons. I also faced some resistance with my non-traditional, movement-based outlook. Progress has been slow but steady, with many questions to field along the way. Despite the hurdles, I truly believe that applying Dalcroze pedagogy will not only mark a change for how students learn solfège but will also provide them with lifelong learning through enrichment and appreciation of the universal language called music.

What is the SINEM?

SINEM stands for the Costa Rican National Music Education System founded in 2007 by the Costa Rican Ministry of Culture and Youth. Its goal is to develop affordable orchestra and musical education programs making no distinction of race, religion, or socioeconomic status. It particularly aims to attract at-risk children and adolescents, both in cities and rural areas that are generally less likely to be exposed to formal music education or play an instrument. There are currently twenty SINEM schools throughout the country.

What is Jaques-Dalcroze eurhythmics?

The purpose of this article is to show how Dalcroze pedagogy may be adapted to programs, such as the aforementioned Costa Rican SINEMs. The Dalcroze approach has, at its core, Jaques-Dalcroze eurhythmics, which treats the entire body as an individual’s first instrument. Eurhythmics integrates the elements of time, space, and energy with the improvised music of the teacher to foster collective creativity where students express themselves through different means (gestures, whole body, voice) while also developing social and autonomic skills. Communication involves student exploration of space, both individually and as a group, as they hear the improvised music, generally played on the piano, thereby awakening different emotions and sensations. Eurhythmics also provides a kinesthetic education in which body movement, expression, and feeling precede music theory. The Dalcroze student experiences music through movement and thought to create ideas while learning and acquiring musical notions. According to Dalcroze himself:

The entire methodology is based on the principle that the study of theory should follow practice and that we should not teach rules to students until we have given them the opportunity to experience the facts that made those rules possible, and the first thing we should teach students is the use of all their faculties. It is only later that we can let them learn the opinions and conclusions of others.

Learning a new language involves listening, repetition, discussion, writing, reinvention, and improvisation. According to Mireille Weber, former professor at the Institut Jaques-Dalcroze in Geneva, Switzerland, learning the language of music is no exception and requires the attention of the entire body.

We must grasp the musicality, the pronunciation; to be able to speak it, we must know the words, their meaning, the construction of sentences, the grammar and discover the subtleties that will allow us to express ourselves and communicate. The same thing happens with the language of music (Weber, 2019, 56).

Since solfège is a means of communication for the language of Western European music, one can establish a direct relationship with the fundamentals of eurythmics, which is addressed in the following section.

What is Dalcroze Solfège?

Dalcroze solfège is unique in its use of movement and group work to internalize musical concepts such as pitches, notes, phrases, rhythms, accents, and chords. These strategies, used simultaneously with singing, are intended to awaken our inner ear, which later evolves into reading music and scores as well as understanding and applying intonation, pitch, intervals, and harmony at an auditory, vocal, and practical level. Choral singing is also used to assimilate musical concepts such as canon and improvisation. Singing with movement, rhythmic word games, etc. allows students to “chew over” and process the many concepts of solfège, especially those involving intonation or dictation. Through singing, students are able to express what their ear understands.

Another pillar of Dalcrozian pedagogy is improvisation, which aside from being liberating, is an excellent communication tool that allows the teacher to adapt to the needs and feelings of their students. As Dalcrozians, we have the capacity to create music on the spot to motivate and inspire others. Dalcroze professor Madeleine Duret states that improvisation is a tool that can “do it all” since its objective is to encourage student expression whenever possible. “To invent is also to develop their [students’] imagination and express their sensitivity” (Le Rythme, 2011, 17).

Understanding the premise of improvisation is necessary to allow us to delve further into this pillar of Dalcrozian pedagogy.

a) Improvisation, language, and communication

In a eurhythmics course, improvisation is not limited to the teacher at the piano. There is vocal improvisation, movement improvisation, and improvisation with objects or instruments, both by the teacher and the students. Duret states that improvisation “is above all a musical improvisation. Whether it is musically or bodily, the reasons for improvising by students are the same: to improvise is to free oneself” (Le Rythme, 2011, p.17). The core idea is to discover how to “liberate the spirit” of the student, as Dalcroze stated, by means of our voices (sung, whispered, spoken with funny words or onomatopoeias) or sounds from percussion instruments or other objects, always bearing in mind that the body is also an instrument.

b) Improvisation and humor

A eurhythmics teacher must be able to create moments of relaxation and humor to lift the spirit of the students. Laughing facilitates acceptance of instruction and encourages positive student participation. During musical improvisation, for example, building an element of surprise into the music can result in stopping in a funny body position, which gets students smiling. This facilitates communication not only through one’s voice and body but also through musical improvisation. As a result, students discover new musical principles in a fun and poetic manner. By integrating excerpts from well-known songs or melodies, or by using certain musical styles such as the Charleston, boogie, swing, or country music, we can encourage joy and laughter during class.

Dalcrozian pedagogy requires teachers to gain a better understanding of how the music they play for the class influences group dynamics through the following activities:

Working on a rhythmic motif

Teachers should have the capacity to perform variations on the music, which encourages a playful and lively class. Duret emphasizes that “…repetition of rhythmic motifs require quick rhythmic modifications without eliminating the essence of the basic rhythm: the notes in a passage, breaths, changes of register, tempo dynamics, shifting the rhythm to another voice” (Le Rythme, 2011, p.16).

These exercises consist of rhythmic, melodic, register, and tempo modifications, etc. to generate an auditory-corporal reaction. Auditory reaction exercises with “hip” or “hop” (verbal or musical) also address group management, since the students must concentrate in order to perform them. These exercises present challenges and, in addition, encourage students to execute them.

Use of contrasting exercises

This method also embraces varied activities led by the teacher. Exercises can be done standing, sitting, in a circle, using their hands, just listening, writing, visualizing, playing, improvising freely, and others. The aim is to achieve a more enjoyable, dynamic, and playful atmosphere. (Jiménez, M. 2019)

Per Dalcroze, one goal of musical improvisation is to “inspire, provoke, and regulate the body and the spirit.” Music must cover space at different speeds and bodily energies. When music suggests individual exploration of space (up, down, sideways, forward, backward) or in a group setting (locations, mobility, accommodations regarding others), students not only perform self-management but also make an effort to consider the work of others in class. If we also use objects, we can better manage space, time, and energy with regards to music.

Although I only recently began to teach at SINEM, social distancing protocols, due to the pandemic, prevented me from teaching the full Dalcrozian rhythmic solfège pedagogy. I resorted to adapting the methodology to my lessons based on the fundamentals of Dalcroze eurhythmics. The following section describes a series of exercises that I implemented for my online SINEM courses.

The activities above were adapted to comply with a proposal based on the online teaching situation. A more purist Dalcrozian methodological approach for a lesson plan is depicted in the lesson plan below.

Posted in "Dalcroze Connections" and tagged International Community, Vol. 6.2
← From Charango to Kultrún: The Richness of Chilean MusicInterview with Iramar Eustachio Rodrigues, Brazil-Switzerland →

Born in Costa Rica, Maristela Jiménez Quesada studied at the University of Costa Rica, where she obtained two degrees: bachelor of arts in violin performance and bachelor of arts in musical pedagogy. She subsequently continued her studies at the Haute École de Musique in Geneva through the University of Applied Sciences and Arts of Western Switzerland. She completed a bachelor of arts and a master’s degree focused on the pedagogy of Jaques-Dalcroze. As a violinist, she has played with the Heredia Symphony Orchestra and the Costa Rica Philharmonic Orchestra and works for various music-event companies. During her time in Geneva, she created the group A-Capello with three other women. The project aimed to generate social awareness through interdisciplinary performances of compositions and arrangements which included singing and movement. She currently teaches musical language at the National System of Musical Education (SINEM) in Costa Rica and offers private violin lessons.