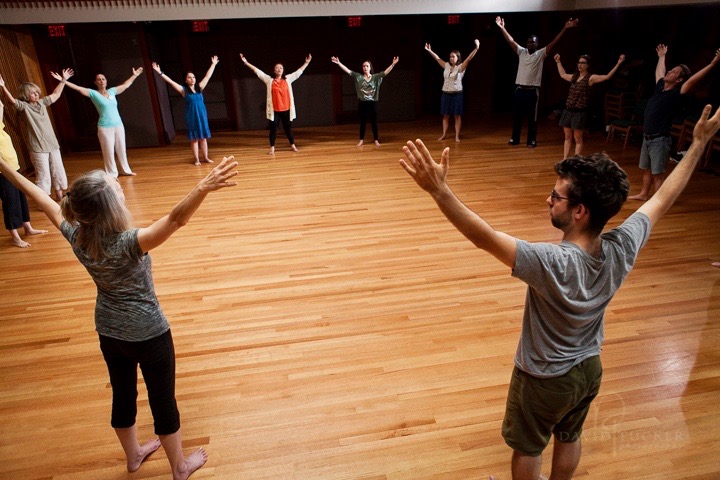 This reflection was written on August 7, 2021

July 25 was our twelfth Zoom meeting, marking the one-year anniversary of our monthly sessions discussing “undoing racism in music education.” I hosted the meeting on Zoom from my AirBnB in Dallas, TX, where I was teaching and learning at the Dalcroze School of the Rockies Dalcroze Academy (DSRDA). Several DSRDA Summer Academy students joined the meeting, along with our core group of committed participants.

At our last meeting in June, we were treated to a guest presentation by Dan Axtell on the life and work of Charity Bailey (1904–1978), a Black American music educator who trained in Dalcroze at the New York school in the early ’40s. Ms. Bailey was Dan’s elementary music teacher, and he shared with us how influential she was in his decision to pursue music. Most notably, she hosted her own television show where she innovated teaching multicultural children’s music and integrated many Dalcroze strategies and principles. Realizing how very few people knew of her, Dan created a website. On this website you can read about her, view one of her television shows, and hear Smithsonian recordings of her singing. She started her TV show in the 1950s, “way before Oprah,” as Dan commented.

I am grateful to Dan for shedding light on this historical figure—a Black woman—who is likely one of many influential artists and educators marginalized in our white supremacist, patriarchal society. We recorded the Zoom session with Dan and are looking into making that available to DSA members. Thanks to Selma Odom for finding him!!

During our July session we reflected on “songs with a questionable past,” and, in particular, songs that are racist. There is a Crowd Sourced Insensitive Songs circulating on the internet that needs continual updating and editing (see the resource page at the conclusion of this article). Today, we focused on songs that originated in minstrel shows. Merriam Webster defines a minstrel antiseptically as “a member of a type of performance troupe caricaturing Black performers that originated in the U.S. in the early 19th Century.”

A lot of songs that we sing and teach in American music education originated in minstrelsy. Some of the lyrics have been changed; “Jump Jim Crow” is now “Jump Jim Joe”. Some educators unequivocally suggest eliminating these songs from our repertoire. Others caution against canceling these songs and encourage us to use them to teach about this horrific history.

“Jump Jim Joe”, once one of my favorite movement songs, and which brought so much joy to my students’ and teachers’ faces, was, as I mentioned above, originally “Jump Jim Crow”. Jim Crow was a blackface character created by a white man in the early nineteenth century who travelled and performed throughout the North and South.

This character is thought to have ushered in the era of minstrelsy, and this is the origin of the term Jim Crow, which was used to refer to the racist segregation laws passed throughout the South.

Minstrel entertainers mocked, belittled and appropriated style and repertoire from—and sometimes incited violence and hatred toward—Blacks. The songs, dances and skits sent a variety of messages, including that Black people were happy-go-lucky and simpleminded, and that they were content with their lot as enslaved people. However, minstrelsy was adopted by Black performers who wanted a place and paid work in the entertainment industry. (For an in depth study of this topic, I recommend “Love and Theft: Blackface Minstrelsy and the American Working Class” by Eric Lott, Oxford University Press, 1993.)

Minstrelsy inflicted damage upon the integrity and humanity of Black Americans. Within this disturbing and revolting practice there is also evidence that whites were fascinated and envious of the talent of African Americans, and white appropriation of the Black performing arts continued post-slavery, post–Jim Crow, post–Civil Rights, and, one might add, still occurs today.

Our culture is so fused with white supremacy, and we have so much denial about it, that we need to be vigilant. I need to examine and question every folk song or repertoire piece that I use in my teaching. Would I teach “Jump Jim Joe” today? This is a question that I am still processing. Do we throw out the baby with the bathwater? On the one hand, yes, because that bathwater is really toxic and that baby is still filthy dirty!

On the other hand, these songs and their derivatives are part of our American culture; some might say they are the roots of our American culture. Doug Goodkin, a much-beloved Orff specialist and multicultural music educator, argues that these Black and white performers contributed to racist creative culture-making. Goodkin cautions against just cancelling songs that are racist. He states:

Teaching the children the actual history of minstrelsy is one way the music teacher can contribute to effecting real change. Because the bottom line of why we’re still dealing with these issues is that white folks have had the luxury and privilege to not only not learn these stories, but to not have to care whether they learn these stories. Our job as educators is to educate and as music educators, to educate through music and dance. And that means changing the narrative that drove chattel slavery, then continued on to the Black Codes, that continued on to Jim Crow, that continued on to the New Jim Crow with its school to prison pipeline, that continues on to yesterday as Georgia tries to suppress black votes yet again. (“The Susannah Papers,” Confessions of a Traveling Music Teacher.)

Yes, racism is at the heart of American culture. This needs to be conveyed to our children, appropriately framed, and scaffolded for different ages. But can I ever again teach “Jump Jim Joe” as the joy-filled game I once thought it was? I don’t think so.

Music educator Jacqueline Kelly-McHale said it well in a recent TEDx talk: “We can’t just change the words and rationalize the song’s use based on pedagogical reasons and expect people to just forget the history”. I recommend checking out our resource document for more info.

We plan to keep meeting on the last Sunday of each month. All are welcome.

Register for the Next Discussion