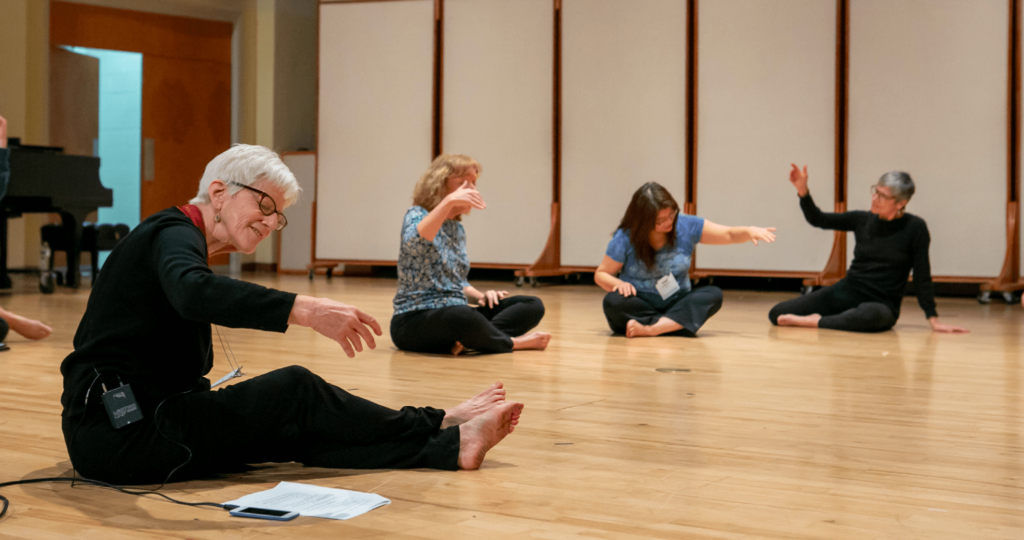 Today’s Dalcroze teacher has easy access to a world of recorded sound that would have been unfathomable to M. Jaques. How do we take advantage of this rich resource and still retain the essence of eurhythmics?

Louise Mathieu helps us sort through the issues in this reprint from the American Dalcroze Journal (Vol. 23, No. 1).

Explore more of the archive at dalcrozeusa.org/adj

Can we reach the essence of eurhythmics with the use of recorded music?

Eurhythmics uses a holistic approach. In asking the body to hear, move, and express the music and the mind to recognize and analyze it, eurhythmics connects the body and the mind in a way that makes these two worlds work together in symbiosis. Eurhythmics commands the whole person to incarnate the music in becoming a moving, thinking body. Virginia Mead writes in her book Dalcroze Eurhythmics in Today’s Music Classroom:

I believe that someone who incorporates Dalcroze techniques in teaching is one who has experienced that joyful awareness and understanding of the power of an integrated physical, emotional and intellectual experience with music.

But that experience—the incarnation of the music—has to be meaningful.

The music itself, through the power of genuine aesthetic quality, makes the eurhythmic experience meaningful; that is, an aesthetic experience. Can we reach the essence of eurhythmics with the use of recorded music? One could answer yes, if the previously described conditions are met:

Improvisation has always been seen as one of the main characteristics of the Dalcroze approach, the cornerstone of eurhythmics. Jaques-Dalcroze wrote:

Each teacher of eurhythmics should have made a serious study of improvisation at the pianoforte, and of all the connections between the harmony of sounds and that of movements. He should be able to translate rhythms expressed by movements of the body into musical rhythms, and vice versa.

Improvisation is indispensable to a eurhythmics class. Recorded music cannot replace it.

Improvisation is a live performance. It has a special quality—it has presence. Improvisation is flexible, creative. It can adapt to the expressive qualities of the student’s movements. It mirrors the movement exactly, expressing the varieties of dynamics, the articulation, the phrasing, the tempo, the style.

Improvisation can emphasize various elements of the music to help the student feel the music in a specific way, to keep the student alert, to enhance the student’s listening, to provoke appropriate movement responses. These specifics are not proper to the use of recordings.

However, I believe that the essence of eurhythmics can be met while using recorded music and that it is a powerful tool to explore and develop the ability to translate musical rhythms into body movement rhythms.

Thus, the use of recorded music will not replace improvisation but can enrich the musical as well as the pedagogical content of a eurhythmics class.

Choosing and using a piece of recorded music: pedagogical considerations

As mentioned earlier, these remarks were followed by a practical exploration of the use of recorded music in a eurhythmics class. The musical works presented were:

This article was originally published in the Fall 2022 issue of Dalcroze Connections, Vol. 7 No. 1.

Dr. Louise Mathieu, Diplôme Supérieur, is a retired professor of the faculty of music of université Laval (Quebec, Canada) where she taught from 1976 to 2016. Director of studies of Dalcroze Canada, she also acts as president of the Collège of the Institute Jaques-Dalcroze (Geneva) and vice-chair of the International Conference of Dalcroze Studies. Louise serves on the editorial board of the journal Recherche en Éduca- tion Musicale and on scientific committees. A frequent lecturer and workshop leader, she holds the Dalcroze diplôme supérieur (IJD, Geneva) and a Doctor of Arts (New York university).

View all posts by Louise Mathieu →