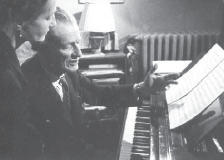 The rhythmic concept of irregular measures appears in Frank Martin’s 8 Préludes pour le piano. It is also a commonly used subject in Dalcroze education. The term “irregular measures” may be used interchangeably with the term “mixed meter,” and is defined here as metrical changes with a constant, unchanging beat. “Unequal beats” will mean beats that change between different numbers of divisions, typically between two and three, though four and even five are theoretically possible.

In Rhythm, Music and Education, Dalcroze expounded on the necessity for irregular measures:

There is no reason to insist upon regular bar-lengths throughout an entire piece. In most folk-songs [sic] the melody is subject to irregularities of measures. It is only in the conventional and classical works of the last two or three centuries that we find a systematic division into regular bars. Far be it from me to object to this classical regularity of bar-time, but, seeing that every irregularity in a work of art must be the product of an emotion, I suggest that the question of the employment of irregular bars should be the subject of special analysis on the part of every musician.

In his dissertation, “Émile Jaques-Dalcroze’s Influence on Frank Martin: 1924-1937,” Daniel Rubinoff noted that Martin and Dalcroze shared an admiration for Bulgarian folk music and, in particular, its distinctive use of irregular rhythms.2 Dalcroze viewed Bulgarian music as a source of innovation for contemporary composers and stated:

The popular Bulgarian melodies…constantly written in irregular metre [sic], and often changing with brief measures of 7/8, 5/8, 11/8, etc., are the product of a very refined sensibility…[that] are not often appreciated by a European ear.

According to Rubinoff, Dalcroze and Martin valued the importance of teaching meter changes, as evidenced by its inclusion in their respective eurhythmics classes. Dalcroze wrote fifty-four single-hand finger exercises for piano consisting of frequent meter changes, which he published in the appendix of La Rythmique vol. 2 as “Exercises on Alternating Measures with Unequal Beats.” Each exercise implies various meter and beat changes, though time signatures are not indicated (see musical example 2).

Similar to Dalcroze’s right-hand exercises, Martin utilized irregular measures in Prélude IV without indicating the meter. The implied meters found in Prélude IV include the following: 5/8, 6/8, 7/8, 8/8, 9/8, 10/8, 12/8 and 13/8 (see musical example 3). The beats can be divided into two or three divisions.

As previously stated, Martin and Dalcroze were attracted to the complex rhythms of Bulgarian music, which is often associated with unequal beats. In Martin’s essay “La mesure et le rythme,” he discussed his admiration for the ease of Bulgarian indigenous people in performing complex rhythms, including unequal beats. Martin begins the following discussion with an approach that might be typically used by a classically trained musician:

We can consider a measure of 14/16, like a measure of 6/8 in which two sets are formed of seven 16th notes each, and the accent is on the first and the eighth 16th notes. But this misrepresents the rhythm. For Bulgarian shepherds, rhythm is a simple succession of long and short notes, and the accent is constantly displaced from one note to another without there being a feeling of difficulty. Musical example 6 presents the opening measures of the Bulgarian folk song “Dilmano, Dilbero.” Here, the division of unequal beats within the time signature of 8/16 is illustrated with dotted lines.

Musical example 6 presents the opening measures of the Bulgarian folk song “Dilmano, Dilbero.” Here, the division of unequal beats within the time signature of 8/16 is illustrated with dotted lines.

Martin’s association with Dalcroze is clearly evident when he states that Prélude IV was composed with unequal beats and provided an analysis of unequal beats divisions in his Entretiens sur la musique:

Here is an unmeasured Prélude. There are measures, if you will, but one has 7 beats, another 8, and the next one 9, etc. Actually, they are measures with unequal beats.

Dalcroze discussed his thoughts on the irregularity of unequal beats in his book, Rhythm, Music and Education:

These (unequal beats) will produce at first sight an impression of irregularity. But their conscious and persistent repetition and symmetry will create a new regularity and symmetry which will prevent their compromising the unity of the metre [sic]…Many musicians fear that these disparities and irregularities may prejudice unity of style, by producing abrupt and jerky phrases and rhythms. It is, however, an established fact that every series of uneven time-values repeated at regular intervals gives an impression of regularity.

Dalcroze’s perspective on unequal beats can be applied to the process of learning and memorizing Martin’s Prélude IV on the piano. The meters are constantly changing in this prelude, and when a specific meter reoccurs, it provides the performer with a sense of regularity in the music. This happens when the unequal beats are identical, as in measures 2, 11, 17, and 26 (See musical example 10).

Frank Martin and Émile Jaques-Dalcroze established a close collegial relationship beginning in 1928 and supported and admired each other’s works throughout their lives. Even though Martin’s strong interest in rhythmic experimentation began before his involvement with Dalcroze eurhythmics, the years spent as a student and professor at the Institut Jaques-Dalcroze deepened his experiences and understanding of rhythm. Through the eurhythmics method, Martin’s treatment of rhythm in various compositions grew more sophisticated and potent. Specifically, within the 8 Préludes pour le piano, the foundational eurhythmics elements of irregular measures, unequal beats, polyrhythm, rhythmic counterpoint, and canon are evident as they make vivid contributions to the musical effects. Moreover, through his many publications, Martin became a consistent advocate for Dalcroze and eurhythmics; it is in his writings that Martin was able to fully elaborate upon his understanding and support of Dalcroze’s educational method.

This article was originally published in the Spring 2021 issue of Dalcroze Connections, Vol. 5 No. 2.

Chiew Hwa Poon teaches music full-time as a senior lecturer at the University of Malaya in Kuala Lumpur, Malaysia. She holds a D.M.A. (piano performance) from the University of Arizona and recently obtained her Level 2 Credential towards the Dalcroze Certificate at the Longy School of Music, Boston.